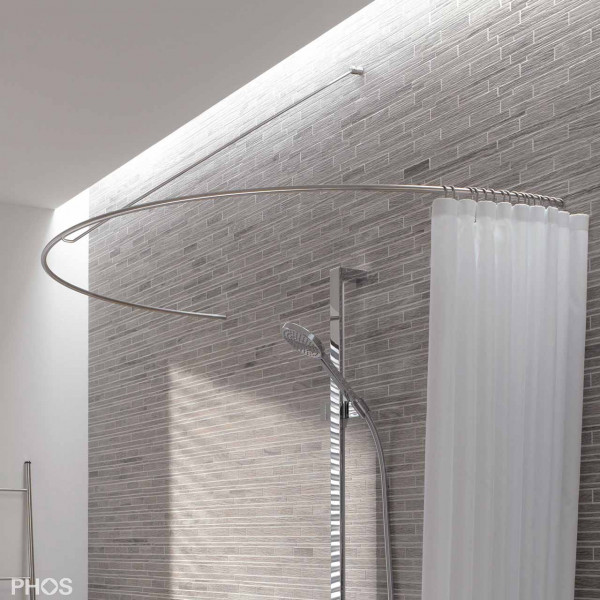 U shaped half round shower curtain rod, bent as a half circle, without ceiling bracket, with diagonal wall bracket for the vertical wall only installation of the shower rod!

To install the diagonal shower rod ceiling holder at least 70cm space is required above the shower curtain rod!

Shower curtain rod without ceiling holder mount with adhesive adapter, without drilling and no holes.

The -never-drill- adhesive adapter allows you to mount the shower rod to tiles - without drilling - and without leaving holes. A practical mounting aid, which also makes the installation of the shower rod much easier.

To mount the shower curtain rail, only 3 holes need to be drilled. If this is not as successful as thought, stainless steel covers cover rosettes cleanly cover the connection between bracket and wall. When mounting the shower rod on a surface tiled with glass mosaic, we recommend in any case to mount a large rosette (40x3), if the hole for the shower rod or the diagonal brace cannot be drilled safely through a single glass mosaic tile and has to be extracted and covered with a rosette.

As standard surface the shower rod is available in brushed stainless steel. The surfaces are finished by hand at the end. The high-gloss polished surface is a custom-made product and cannot be exchanged. With the high-gloss polished surface similar to chrome, an additional time expenditure of approx. one week must be expected. This shower curtain rod surfaces fits perfectly to the stainless steel surfaces of many bathroom accessories with which you can complete the bathroom.

Individual custom-made shower curtain rails are possible after consultation. Due to the production in Germany, we can respond to every wish and size individually.

Included the delivery: Includes two wall brackets, a wall brace for mounting at a 45° angle and everything you need to mount the shower rod.

Quality Made in Germany

Our conclusion: This is what it looks like when a designer thinks about form and function. Every single part of the shower rod is well thought out and precisely handmade. The surfaces are scratch-resistant, uncomplicated and inherently hygienic as stainless steel has an antimicrobial effect. Especially praised by our customers, is the discreet look of the shower rod, which is with a diameter of only 12mm very filigree and noble to a bathroom design.

If you have any further questions about this shower rod, please contact us.