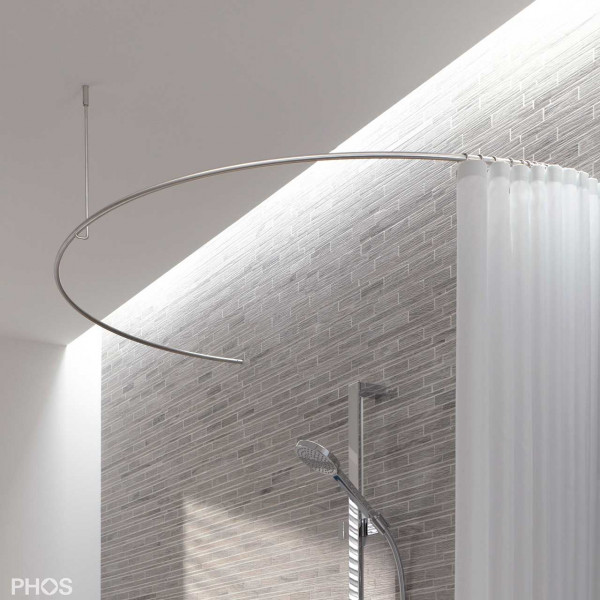 U shaped shower rail, for walk in shower enclosures and bathtubs. Best Quality -Handmade in Germany-
360.00€

Halfround shower curtain rail as U shaped half circle. With classic ceiling mount and wall socket as best shower rod for bathtub and shower.

If you want to use a very high bathroom ceiling and not a very long ceiling holder in over length, the DR70HW shower rod with a diagonal wall bracket can also be mounted directly on the vertical wall without an additional ceiling holder.

What is the right height of the ceiling mounted shower rod in a barrier-free and floor-level shower? The distance between shower curtain hem and the floor or shower tray should be 1-2cm. The shower curtain should hang within the sloped surface of the water drain and behind a possible barriere of the shower tray.

The -never-drill- adhesive adapter enables you to fix the shower rod onto tiles - without drilling a hole-. A practical assembly help, which also makes the assembly of the shower rod much easier.

Otherwise only 3 holes need to be drilled to fix the shower curtain rod to wall and ceiling. If this does not work as planned, the stainless steel cover rosettes will cover the transition from shower rod and wall. When mounting the shower rod on a glass mosaic tiled wall, we recommend in any case to mount a large cover rosette (40x3), if the hole for the shower rod or the ceiling socket cannot be drilled safely through a single glass mosaic quarter, the rosette will cover any problems.

Individual custom-made shower curtain rails are possible after consultation. We respond to every wish and every measure individually.

Included: Shower rod including two wall mount sockets, a ceiling holder and all necessary mounting material such as screws and dowels.

Quality Made in Germany

Our conclusion: Top notch quality - Made in Germany - This shower rod is what a shower rod should looks like when a designer thinks about form and function.

If you have any further questions about this shower rod, please contact us.