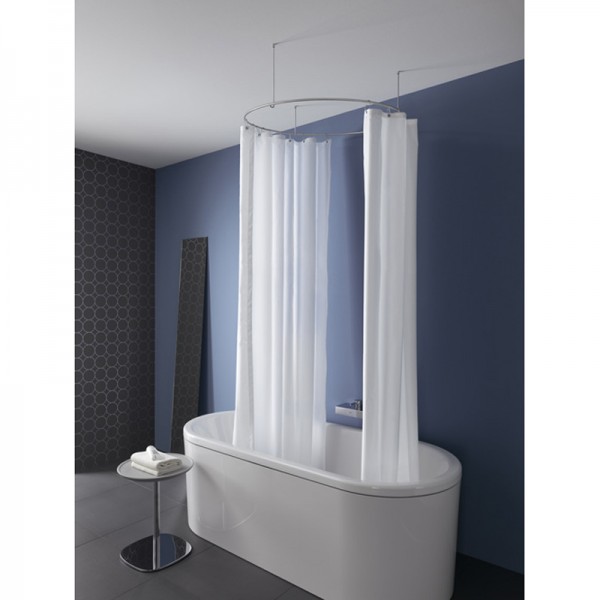 Circle round shower curtain rod with 900 mm circle diameter, e.g. for free standing bathtubs or walk in showers. -Made in Germany-
475.00€

The shower curtain rail does not require a wall mount and can be freely mounted on the ceiling. The shower rod is therefore well suited for bathrooms where, there is no wall available to mount a classic shower rod or the bracket ends exactly where a window prevents the installation of a wall mounted shower curtain rod. This is the classic round shower rod for a free-standing bathtub or comfortable "walk in" shower at floor level.

With a flexible shower rod adapter you can attach and align the ceiling brackets of the shower rod on any sloped ceiling like under the roof.

The cover rosette 25x3 guarantees a clean finish between the bathroom ceiling and the ceiling bracket.

Longer ceiling holders and the shower curtain rod are available made to measure.

The shower rod is available in satin-brushed stainless steel or as a custom-made high-gloss polished version (excluded from exchange). The polishing of the shower rod takes about one week additionally.

For your choice the combination with stylistically matching stainless steel bathroom accessories e.g. towel holder or towel ladder is available.