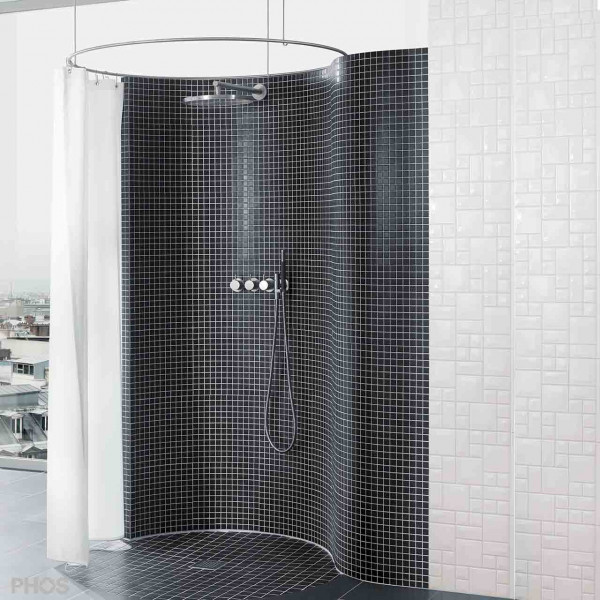 Circle round shower curtain rod with 800 mm circle diameter, e.g. for bathtubs or walk in shower enclosures. -Made in Germany-
490.00€

The shower curtain rail does not require any wall mount and can be installed very comfortable on the bathroom ceiling. The classic round shower rod for a free standing bathtub or barrier-free and floor-level walk in shower. The shower rod is also very helpful where, there is no wall to mount at or the shower rod would end exactly where a window prevents the installation of a shower curtain rod with a classic wall bracket.

For any individual request or advice on the best possible bathroom design, we are happy to help by phone or e-mail. Contact.

On request, longer ceiling brackets and the entire shower curtain rod can be supplied as made to measure.

With a flexible shower rod adapter you can attach and install the ceiling mount of the shower rod to any sloped ceiling as a slanted roof.

The standard surface of the shower rod is stainless steel matt brushed. A high-gloss polished surface is available as a custom-made product and cannot be exchanged. For the hand polished version, an additional time expenditure of one week must be expected.

Design the bathroom as if it were one piece, with towel holder as towel ladder or towel hook and selected bathroom accessories made of stainless steel.