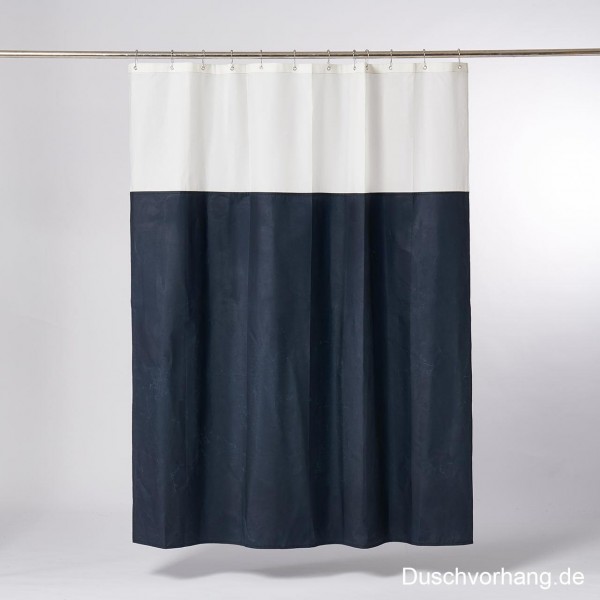 Sustainable and environmentally friendly shower curtain, blue and nature coloured. Free of plastic and fluorocarbon. Doesn't stick on you quality. - Handmade in Germany -
159.90€

Non toxic and environmentally friendly shower curtain made of cotton, in the colour combination blue and nature.

The shower curtain captivates by the combination of noble, dark blue with the natural colour of undyed cotton. An environmentally friendly shower curtain that is 100% free of plastic and fluorocarbon, looks good and does not stick to the body due to its own weight.

The shower curtain is particularly suitable for comfortable, barrier-free bathrooms. Because, as with any shower curtain, it is an advantage if it can drip off and dry freely after the shower. When used in the bathtub or shower tray, it should therefore be avoided that it permanently sticks to the edge of the bathtub or stands in water.

Number of eyelets: On 120cm - 8 eyelets and 180cm -12 eyelets made of stainless metal. Fastening rings not included as they depend on the shower curtain rail used.

The shower curtain is made of waxed cotton and repels water but not oil. Oil stains perpetuate themselves on the surface if they are not removed in time.

As with any shower curtain, scab and rotten skin is avoided if it hangs dry and free after showering.

As with every shower curtain, especially with waxed cotton, the care and cleaning is decisive for its durability and patina.

As with every shower curtain, when used in a bathtub, you should make sure that it does not hang too deep and does not stick permanently to the edge of the tub, so that it can dry better.

The impregnation has "self-healing" properties, which, however, diminish over time. If you wash frequently, you can re-impregnate with an impregnating agent for waxed textiles, e.g. for waxed jackets and bags. If you want to iron your shower curtain after washing, you should place baking paper underneath it so that the cover of the ironing board remains clean when ironing the wax.

Avoid unnecessary washing in the washing machine and remove dirt by hand, with a sponge or a soft brush. For heavier soiling, soak the area with clear cold water and rub the fabric against each other. Refresh the impregnation.

Care determines the condition. We trust in your intuition what is reasonable for this shower curtain.