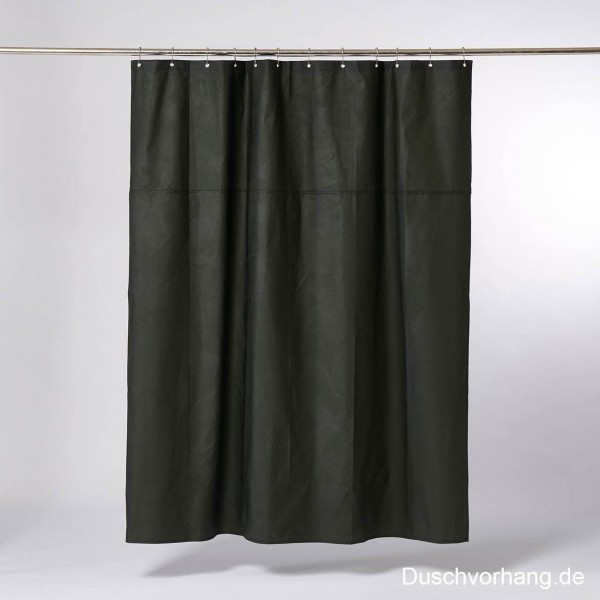 Environmentally friendly shower curtain made of cotton, in green.

Textile shower curtain in the dark green of the woods, which must be preserved. Made of waxed cotton, the shower curtain is 100% free of plastic and impregnated in an environmentally friendly way without fluorine chemicals. Due to its pleasant weight, the shower curtain belongs to the group of shower curtains that do not stick to the body. The careful processing by hand and well thought-out construction makes it possible to do without other plastics.

The shower curtain is particularly suitable for use in a floor-level shower, where the shower curtain can hang freely all around and dry. When used with a shower tray or in the bathtub, you should avoid that it sticks permanently to the edge of the tub or stands in the water.

As with any shower curtain, scab and bum are avoided if it hangs dry and free after showering.

As with every shower curtain, especially with waxed cotton, the care and cleaning is decisive for its durability and patina.

As with any shower curtain, when used in a bathtub, you should avoid it sticking permanently to the edge of the tub, as it will not be able to dry.

The shower curtain made of waxed cotton repels water but not oil. Oil stains will perpetuate themselves on the surface.

The impregnation has self-repairing properties. However, avoid unnecessary washing in the washing machine and remove dirt better with a sponge or a soft brush. Detergents should be used sparingly. For heavier soiling, soak the area with clear cold water and rub the fabric against each other.

The fabric is so tightly woven that it does not let any water through. If the water-repellent effect diminishes over time, you can refresh the impregnation with an iron without steam and at low heat. To protect against stains, place a cloth or baking paper on the ironing board beforehand. Later you can also use any impregnating agent for wax jackets and bags.

The shower curtain is environmentally friendly and sustainable. It also looks good because it develops an individual patina.